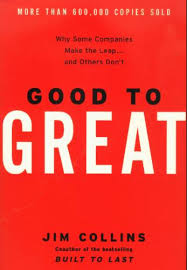 1. They had quiet, self-effacing leaders. People who had a “paradoxical blend” of humility and professional will. They were more like Lincoln and Socrates, Collins argued, than Patton or Caesar.
2. These leaders placed the highest priority on surrounding themselves with great people. Rather than focus on vision or strategy, they spent most of their time trying to “put the right people on the bus and get the wrong people off the bus.”
3. They embraced the “Stockdale paradox” – that you must accept and confront the worst facts of your situation while maintaining an unwavering faith that you can overcome them.
4. They found something they could do better than any other company in the world. Even if it meant abandoning their core concept and moving on to something else, they maintained that lofty standard.
5. They developed a corporate culture where employees were so committed to the company’s core values that disciplinary rules were not necessary.
6. They used technology to support their core values, not as the driving force of the business.
7. The process they used to make improvements was incremental, not revolutionary. It resembled “relentlessly pushing a giant heavy flywheel in one direction, turn upon turn, building momentum until a point of breakthrough and beyond.”

This site uses Akismet to reduce spam. Learn how your comment data is processed.

No comments to show.